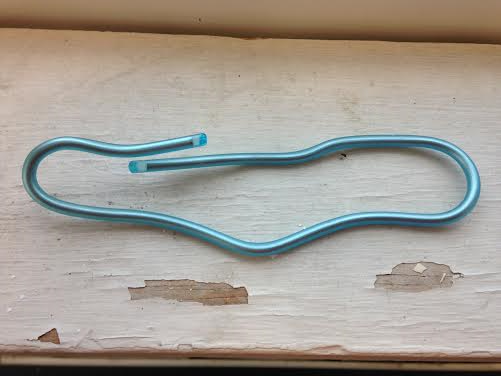 On Saturday, January 17th, I attempted a winter Pemi Loop. The day seemed perfect for it, but immediately after summiting Little Haystack the windchill dropped and the icy winds picked up. The mountains said to turn back, and I’ve learned not to argue.

The week after, I returned. On January 24th I was granted a perfect day to traverse the eight, four thousand+ foot peaks that comprise this 31.5 mile mountain loop. 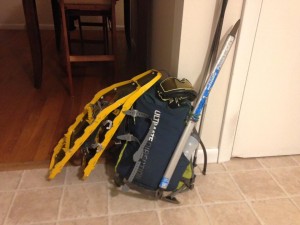 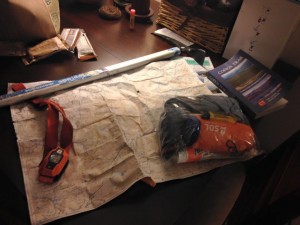 I pulled into Lincoln Woods trailhead just after 4am. As I filled out the parking pass, I shook in the cold winter morning. My breath was thick as smoke as I stood beneath an enormous and powerful moon. A Wolf moon, as I would later find out. Thanks Allison 🙂

I got my gear together in the car, then used the restroom to put on my snowshoes and pack, so that I could get moving before a real chill set in from gearing up outdoors. I left the warmth of the restroom’s space heater at 4:45, and I crossed the Pemigewasset River by headlamp to begin the adventure.

The run along the Lincoln Woods trail was lit up by that wild moon, and the raging Pemigewasset gurgled, rolled, and roared alongside me.

As I reached the Osseo Trail, I quickly took off my puffy coat and prepared to climb hard. Halfway up the trail I had to put it back on, as the darkness and the quiet cold of the mountains wrapped me in a blanket of frosty air.  I completed the run without removing it again.

As I got close to the summit of Flume, the sky had begun to glow around me, and I realized that if I pushed really hard I might catch a perfect sunrise on the summit. I picked up the pace, digging my poles into the snowy trail, and wound my way up the snow packed staircases towards the peak. Before long, I became sort of obsessed with not missing this moment. I hiked and ran as hard as I could to not let the rare opportunity pass. As it goes, I almost missed the experience of ascending one of my favorite mountain trails by the glowing light of sunrise by focusing on the next destination. Fortunately, I caught myself with a powerful thought.

The sun rises, every day. 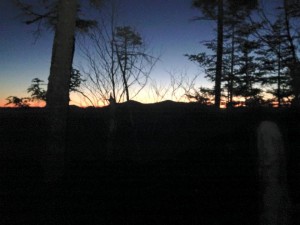 This brought a smile to face.

The summit of Flume was as gorgeous as I’ve ever seen it. Purple and green and golden trees, all caked with white and sprinkled with frost. I took a few pictures and moved on. 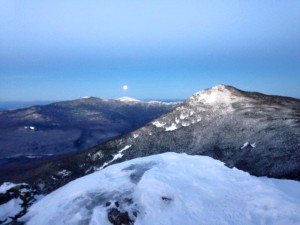 Shortly after, the unthinkable happened. My phone’s lock screen malfunctioned, making the camera inaccessible. This was one of the most perfect days I have ever experienced in the mountains, with views extending further that I can begin to capture with words. Now, I had to experience it alone, without the ability to share it with friends when I returned to the land of internet, cafe’s, and coffee. I was devastated.

It took a while for me to recognize the gift that I had been given. Without the ability to capture the imagery that surrounded me, I was forced to receive it all with a presence and a level of clarity which would cause me to remember it forever.

The run along the Franconia Ridge was like a dream. Ice gleamed, and the sun shone down to light my path across rocky trails, glittering with diamonds of frost. The summit of Lafayette was quiet and still, with a gentle wind blowing through the sky.

Garfield Ridge was wild! Mostly unpacked and like a giant snow slide! I skidded, slid, and billowed down the trail, until I ran into a couple heading toward me. It turns out that they were doing the loop as a two day backpack, and we had packed each other’s routes!

Soon I got to Galehead, but not before a much needed stop at Garfield Spring. One of the unexpected challenges of this run is that, despite my best efforts, I could not keep my water from freezing. So, I grazed off of the trees like a deer, eating big mouthfuls of snow. Many times I’ve felt like an animal in the mountains-a filthy one, a powerful one, and a wild one, but never such a gentle one as I did that day.

When I saw that the spring near Garfield was running strong, I broke out my ice axe and chopped the top off of my frozen bottle to fill up. I drank deeply. Unable to run with open bottles I relished my icy mountain water stop and moved on, subsisting on mountain snow cones (save for a drink in the brook near runs end) for the rest of the day.

I met an awesome woman at Galehead who was out hiking with her family. She was kind enough to take my picture and send it to me. It turns out that her daughters have an interest in fastpacking and trail running, and we may connect in the future as they seek out a coach. Truly looking forward. 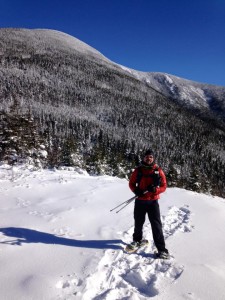 In the first and only real mishap of the day, one of my snowshoes broke near the hut. The binding completely busted, leaving the shoe hanging by a screw and spinning around my foot! Fortunately, I had some serious wire with me, and was able to tie the footplate to the frame for the rest of the run.

As I hiked up the Twinway, my waterproof gloves finally soaked through and froze. My big mittens froze as well. I dug into my pack to pull out back-ups, and a packet of hand warmers. It feels good to have exactly what you need, when you need it. My hands never felt cold again.

Climbing up the Twinway was fun, as I’ve only run the loop counter clockwise and haven’t had the chance to climb this crazy trail. Right before the climb, I remembered that I packed a huge Butterfinger bar! This was a great decision. I felt super strong on the climb.

I reached the summit of Guyot and felt amazing. I love the Bonds and was excited to see them at this time of the day. I normally run the loop clockwise to avoid finishing on the Wilderness Trail, but today I had some reflecting to do and actually looked forward to the long stretch of railroad bed to process my expereince. The stretch from Guyot to Bond was a beautiful winter moonscape. Perfect trails lit up by a late afternoon sun. Trails that can only look as they do now after a very long day in the mountains.

I stood atop Bondcliff, looking out over the entire loop and felt the deepest sense of peace as I took in the day.

I dipped below treeline and here I found fast, runnable trail that seemed to go on forever. I was moving well, but I was in no rush. I took all time goals away from this run. This one was just for me, and I was determined to experience time exactly as it was.

I reached the Wilderness Trail, which stretched out for miles ahead and reminded me of my winter runs on the Eastern Trail in Scarborough. I ran my first 20 miler there, on a freezing cold day, years ago. Before long, I reached the bridge where this adventure had stared just over 12 hours ago. I ran across it, and it felt though I had completed the loop for the very first time!

I gave a loud WHOOP!!! and then I stood silently for a moment to look at the river before returning to the car and bring this incredible day to a close.

This is what I run for. Big days in the mountains, that we never forget.

I feel blessed to have accomplished this run on such a perfect day, and I have one more big adventure planned for this winter before I turn my attention to the Cruel Jewel 100 in the spring.

Here’s to a year of making memories in the mountains! 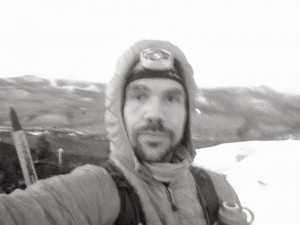